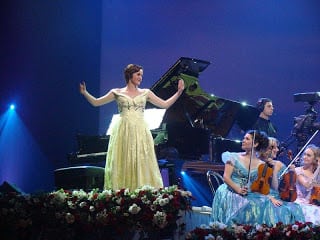 Posted at 12:13h in Uncategorized by showcase pianos 0 Comments
Share

My wife and I attended last night’s performance by Andre Rieu. Shortly after arriving to our seats, we wondered what kind of piano was on the stage.

We were delighted to find out that he had a beautiful Fazioli piano on the stage as part of his orchestra!

Our subsequent research revealed that Andre Rieu has two Stradivarius violins (made in 1667 and in 1732), and two Fazioli grand pianos!

The Fazioli dealer in Holland confirmed that he has travelled with a Fazioli since 1993, and he later bought another Fazioli to use in his studio in Maasticht.