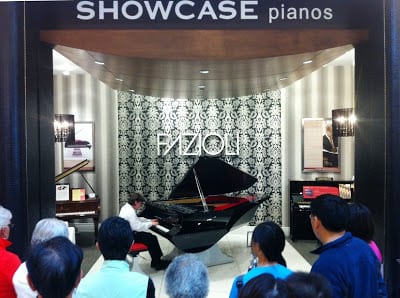 Posted at 17:08h in Uncategorized by showcase pianos 0 Comments
Share

VANCOUVER, BC – On Saturday, September 18th at 11:30 a.m., Showcase Pianos staged a free public piano concert at Aberdeen Centre, showcasing one of the world’s most expensive pianos – a $450,000 futuristic-looking Fazioli M. Liminal – one of only 8 in the world.

The concert is a celebration of sales success by Showcase Pianos, a tiny piano store opened in 2007 by Manuel Bernaschek. In just three years of operation, the store has become a global leader in sales of the Italian ‘Fazioli’, a luxury piano brand that is winning raves with the world’s top musicians. In 2008 Showcase was named ‘Top Fazioli Dealer in the World’ and placed second in 2009 among almost 40 dealers around the globe.

Originally expecting to sell 2 or 3 Fazioli pianos each year, with prices starting at $75,000, Showcase has sold 27 since opening in 2007.

In the piano industry, simply surviving the economic typhoon is a feat in itself. The meltdown hasn’t been kind to retail stores and factories alike. In the last few years, the famous Austrian piano maker ‘Bosendorfer’ was purchased by Yamaha. Last year ‘Schimmel’, Germany’s largest piano maker measured by unit volume, filed for Chapter 11 bankruptcy. Probably the most shocking of all changes occurred late in 2009 when piano giant ‘Steinway & Sons’ sold 1.7 million shares to ‘Samick’, a Korean musical instruments company. Samick now owns 19% of Steinway.

How has the Fazioli piano factory faired during this difficult time? Factory owner Paolo Fazioli, the pianist and engineer behind Fazioli pianos, answers from his office just north of Venice: “We are quite satisfied with the number of orders we are receiving. There are still signs of life in the United States, and when things slowed down in the US, we experienced an increase in orders from other countries. We continue steadily producing close to 100 pianos a year.”

Locally, Showcase Pianos store owner Manuel Bernaschek feels fortunate to have survived the difficult period. About to begin his fourth year of operations, he can boast of now having 2 locations, and of having sold Fazioli pianos to two of the top hotel lounges in Vancouver, the Shangri-La and Fairmont Pacific Rim, where musicians are hired to play daily.

Bernaschek’s efforts have not gone unnoticed, as he was recently nominated for the ‘Top 40 Under 40’ award for BC. Jess Alfonso, president of Seamark Development, said of his efforts: “His promotional efforts and his capacity as a rainmaker are seldom seen in any individual. This is a story of entrepreneurship that needs to be recognized.”