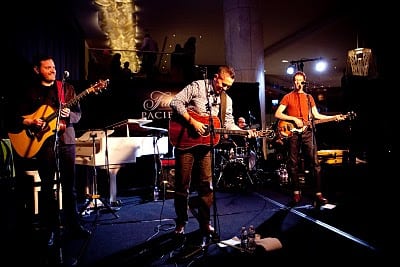 Posted at 17:02h in Uncategorized by showcase pianos 10 Comments
Share

VANCOUVER, BC – During a private reception on Wednesday evening, Canadian alternative rock band group ‘The Barenaked Ladies’ performed a few songs for a large group of appreciative spectators in the lobby lounge of the all new Fairmont Pacific Rim Hotel – including one song about the Fazioli piano!
The performance celebrated a new partnership between Fairmont Hotels and EMI Canada, and helped kick off the new hotel’s lobby lounge as the city’s freshest venue for live music.
The lobby will feature free daily performances from 5pm to 8pm for the enjoyment of anyone who happens to comes and enjoy a cocktail or a bite to eat from their new sushi bar.
The hotel opened in January under the experienced hand of General Manager Randy Zupanski. The opening came just in the nick of time for the Olympics, which made Vancouver’s newest 5-star hotel the center of excitement and activity.
Visitors to the lobby lounge will be quick to notice a stunning and unique center piece – a satin white Fazioli piano. Known to musicians as the ‘Ferrari of the piano world’, this instrument was built by hand in Italy. The $225,000 piano has a wood inlay that echoes the 150 foot long sculpture made by local origami master Joseph Wu that soars directly above it.
Click here to see a mini-documentary of the Fairmont’s new white Fazioli piano.
The director of food and beverage for the Fairmont Pacific Rim hotel is none other than Mark Steenge, a name that will be quickly recognized by longtime lovers of fine-dining in Vancouver, as Mr. Steenge was the general manager of the famous Lumiere Restaurant for many years.
Mr. Steenge would be quick to recommend ordering the lounge’s signature item: a 24-hour braised beef short-rib poutine with hand-cut fries and house-made thyme curd.
Photos by Scott Adolph, Sculptures of Light Photography