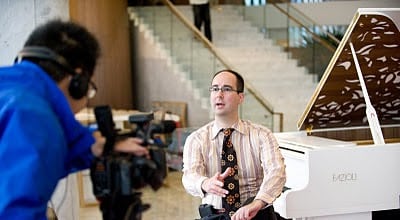 Posted at 20:25h in Uncategorized by showcase pianos 0 Comments
Share

VANCOUVER, BC – The new white Fazioli is now in its permanent location in Vancouver’s new Fairmont Pacific Rim Hotel. The piano was commissioned by the owner for design by award winning BC architect McFarlane + Green + Biggar. The $225,000 satin white Fazioli piano features a stunning 3D design underneath the lid, has many parts plated in 18K gold, and will be a permanent attraction of the hotel lobby.

Founder Paolo Fazioli travelled from Italy to personally unveil the one-of-a-kind white piano at a media event for the piano at the new Showcase Pianos Fazioli store in Richmond’s Aberdeen Centre.

About Fazioli Pianos: Thirty years ago Paolo Fazioli made pianos with the goal of making the best one in the world. Now the Fazioli is widely regarded as being the fine st piano in the world, and is one of the key players on the concert stage. Since their arrival locally just over 2 years ago, 23 Fazioli pianos have been sold through Showcase Pianos, and the Fazioli pianos have been featured on TV news over 40 times, some of which can be seen here: