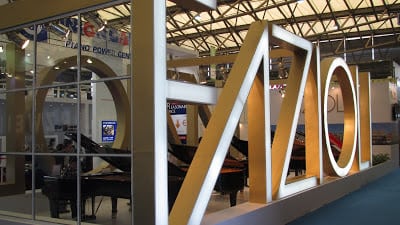 Posted at 17:25h in Uncategorized by showcase pianos 0 Comments
Share

SHANGHAI, CHINA – Each year there are 3 big tradeshows for musical instruments in the world, the biggest of which is now the one in Shanghai.  Whereas it might be acceptable to have a simple display at the famous NAMM Show in Anaheim, many piano factories will go the extra mile and make a beautiful display in Shanghai.


This year Fazioli made a beautiful booth, and displayed 6 pianos – including the special ‘Marco Polo’ Art Case piano.  Fazioli invited Manuel Bernaschek of Showcase Pianos in Vancouver to use his ability in Mandarin Chinese to help at the show, which was a 4-day barrage of noise as visitors came to test the literally hundreds of pianos at the different booths in the hall.


The Fazioli name continues to grow stronger in the music world as was evidenced by the many competitors that came to pay their respects to Fazioli founder Paolo Fazioli and express their great admiration for what he has accomplished with his incredible pianos.


This year the Fazioli factory has again produced more pianos than they ever have before in any calendar year, and have now surpassed the grand piano production of several well know German brands.


After dining with Dr. Jian Li, the dean of the Shanghai Conservatory of Music, and other ‘heavies’ including the President of the Shanghai Symphony Orchestra, it was commented: “It’s a real privilege to be associated with some of the greatest success stories in the piano world today: Paolo Fazioli for being an artist with a passion for creating perfection, and his dealer in China – Parsons Music – who has become one of the most powerful companies in the music world.”


Parons Music, owned by brother and sister team Terrence and Arling Ng, employs a total of 4,600 worldwide and owns one of the largest piano factories in the China.  Next year they hope to produce 70,000 pianos, many of which are for Kawai, Baldwin, Brodmann, Sejung, and Steinberg.  Bernaschek was invited to speak to 45 of their senior branch managers and sales people about promoting the Fazioli brand in China.


Throughout the presentation, many in attendance asked questions related to comparing the Fazioli to other well-known brands.  Upon hearing the translation Paolo Fazioli stopped the discussion to give a strong reminder to all those in attendance that the only focus should ever be to tell the customer the features of our own piano – and never to sell by putting down others brands.


During a private dinner on the final evening, Paolo Fazioli expressed that the continued increase in orders meant that they may eventually need to consider yet another expansion.  Fazioli again emphasized that no single brand should be aiming for world domination, and that his ideal has always been to give pianists a choice. 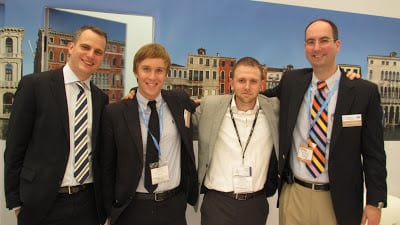 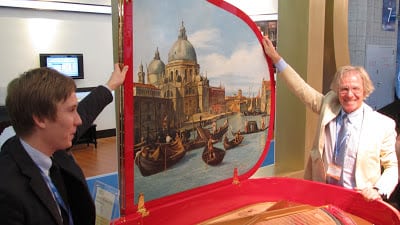 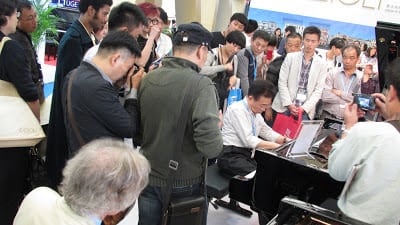 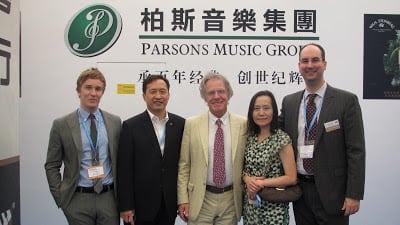 [Paolo Fazioli and son Luca together with Terrence and Arling Ng]