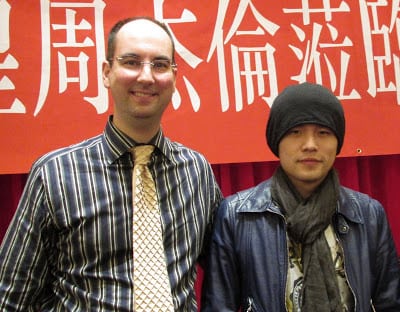 Posted at 22:11h in Uncategorized by showcase pianos 0 Comments
Share

VANCOUVER, BC – On Thursday the 23rd of December, Taiwanese Superstar Jay Chou 周杰倫 performed at the Rogers Arena, and the $75,000 Fazioli piano that he borrowed from the local Showcase Pianos store is now available for sale. Jay Chou’s concert in Vancouver was the only Canadian city that was part of his Era 2010 World Tour, and for it he borrowed the Fazioli F156 (5’2”) baby grand piano.

Showcase Pianos store owner Manuel Bernaschek 白明威 was invited to join Jay Chou 周杰倫 and his crew for dinner in Richmond after the concert, where the star showed Bernaschek 白明威 a drawing of an ‘art-case’ for piano that he designed himself, but has not yet been constructed. Jay Chou was impressed by a photo of the ‘M. Liminal’ Fazioli piano, saying it must be the most modern looking piano in the world. Jay Chou had never seen the ‘M. Liminal’ before, although there is one in the lobby of the Mandarin Oriental Hotel (文華東方酒店) in Taipei. All at the table were impressed that Bernaschek 白明威 could carry on the conversation with them completely in Mandarin Chinese.

The Fazioli F156 (5’2”) that was borrowed for the concert is the smallest grand piano made by Fazioli in Italy. “I used to be quite negative towards pianos that small”, explained Bernaschek, “but one day my wife and I visited the Fazioli dealer in London – Jaques Samuel Pianos – and tried the F156 on display there, and we were shocked by the beautiful tone and the great amount of power that the little piano was capable of. When Jay Chou’s team told us that they required one smaller than 6’ feet long for their concert, we did not hesitate to order one from the factory in Italy especially for his concert.” This is the first F156 ordered by Showcase Pianos.

Factory owner Paolo Fazioli will travel to Vancouver in January to dedicate the ‘Fazioli-suite’ that has been created in his honour at the new Fairmont Pacific Rim hotel.

The piano used at the Jay Chou 周杰倫 concert can be purchased by contacting Showcase Pianos: http://showcasepianos.com